Coltan (or colombo-tantalite, also known as Niobium and Tantalum) which is a strategic mineral utilized in the manufacture of electronic devices (manufacture of passive capacitors) like mobile telephones and laptops. 60% of the world Coltan reserves are located in the Kivu region. Over thousands artisanal workers are exposed to Coltan in the mines (most of them being young). However, very little is known about its human toxicity as well as the toxicity induced by the elements the mineral may contain such as pegmatite rock, radioactive sources namely Uranium, Thorium and Radium. A.O.Mustapha et al (Occupational radiation exposures of artisans mining columbite–tantalite in the eastern Democratic Republic of Congo) have described the exposure pathway during artisanal coltan and thus modeling the radioactive risk in the villages near Goma, in North Kivu.

This work has raised the fact that young artisans working in coltan mining are potentially at risk of high occupational exposures, due to the working conditions and to the radioactivity. Radon has been linked to lung cancer. Public health agencies rank residential radon-222 exposure as one of the leading causes of lung cancer after tobacco smoking. Hence, according to the work by Mustapha, one could expect coltan to be the major residential cause of lung cancer in these miners and to their relatives since coltan is stocked in the house where all the family spends their night. 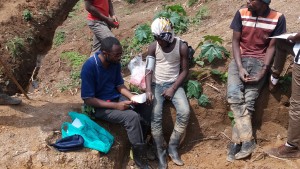 The DRC ranks tenth among the world’s 22 high-burden TB countries and the eighth among countries with the highest rates of HIV/TB co-infection (‘Tackling TB and HIV Co-Infection in the DRC: Results of Integration Efforts in 70 Test Sites – HIV-TB_integration_drc_br.pdf’ 2015). It’s also ranked among fifteenth countries with less than 25% reduction in HIV/TB deaths (‘TB & HIV Co-Infection Statistics | Global, Regional & Africa’ 2015). It seems crucial to understand how environmental risk ssuch as mining activities are associated with the increased in prevalence/incidence of TB-HIV co-infection in this region. Moreover, considering the traditional risk factors of respiratory diseases in mining sectors (such as tobacco smoking and under nutrition) quantifying the magnitude of the respiratory diseases due to coltan exploration is urgently needed.

Finally, respiratory diseases are on top of the list of ten leading causes of death in low income countries according to the WHO ; therefore, tackling respiratory risk related to geological environment such as artisanal mining in general in the context of climate change will contribute largely to improve health in DRC. Thus, our study aims to investigate how environmental risk factors are associated with the burden of respiratory diseases in this geochemical area known with high burden of TB and HIV. Our data will help planning for more effective interventions with policy maker to reduce and to prevent environmental hazards and thus improve health outcome in this region. 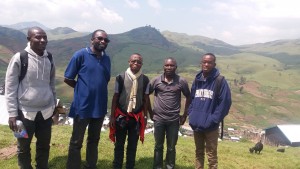