Mining causes severe damages to the environment, for example through deforestation; road construction; booming mining settlements; soil erosion; soil disturbance; pollution of rivers, their sediments and floodplains; pollution by heavy metals (use of mercury and cyanide, as well as other heavy metals such as arsenic and lead); reduction of local biodiversity due to poisoning of fish, birds, mammals, macro-invertebrates and even plants; and death of humans and malformation of the contaminated survivors. Knowing that Congo forest plays a key role in mitigation of global warming and is a sanctuary for many endangered species as well as several endemic species, it is urgent to undertake research assessing and mitigating mining’s environmental impact.

During his PhD (2016-2021), Bossissi Nkuba has highlighted how mercury is commonly used by miners despite being forbidden by national regulation, and how this translates into water, sediment, fish and human’s contamination (by mercury as well as other inorganic pollutants deriving for ASGM). He then helped UNITAR, UNEP and the Congolese Environment Agency (ACE) assess the extent to which mercury is used nationwide, after which he led the development of a National Action Plan for Congo’s reduction of its mercury use in ASGM. Finally, Prof. Nkuba has worked with Impact for the implementation of the National Action Plan of mercury reduction of Côte d’Ivoire and Guinea. He is currently working on other environmental impacts of different types of extraction.

Clarisse Balegamire’s PhD at the Institut National de Polytechnique – Houphouet Boigny in Côte d’Ivoire focuses on how mining waste can be reused in construction. Indeed, mine tailings have shown good durability and other mechanical properties when substituting to natural rivers sands in pavers manufacturing. She combines her background as a geologist at the Université Officiel de Bukavu with her MSc training in Management of Risks and Extreme Events at Université de Liege to analyse alternative uses of mine waste locally. 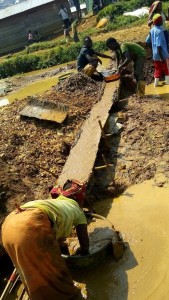 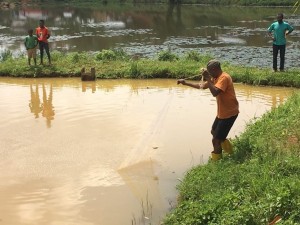