Chaired by Prof. Gavin Hilson, the 4th edition of Extraction for Development #Ex4Dev was held at the University of Surrey, United Kingdom. CEGEMI contributed to this event through two of its ongoing studies.

The first study looks at Mining and Farming as a platform for local economic development and stability building in the Democratic Republic of Congo. This study in which CEGEMI participated through the expertise of its researcher Francine IRAGI MUKOTANYI was commissioned by the UK Department for international development (DfiD) private sector development program in the Democratic Republic of Congo (DRC) and was presented by Jonathan Mitchell from the Oxford Policy Management in a panel on Decent Work and Financial Inclusion composed of  : 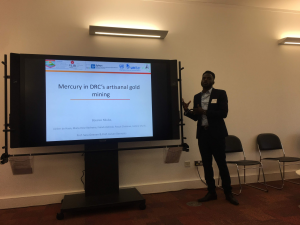 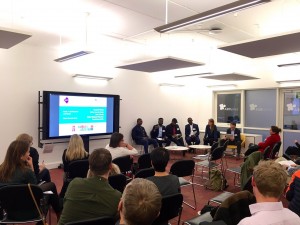 The second study conducted by Bossissi Nkuba, was on « Environmental and health impacts from Artisanal Mining in DR Congo » and included both key results from the Minamata project conducted by CEGEMI in partnership with the Congolese Environmental Agency (ACE), the UN Institute of Training and Research (UNITAR) and the UN Environmental Program (UNEP) in 2018 as well preliminary results of his PhD research (that is being conducted at the University of Antwerp since 2016). The health & environment panel was composed of :